According to several reports, there was a fire outbreak at the Murtala Mohammed International Airport (MMIA) in Lagos State. 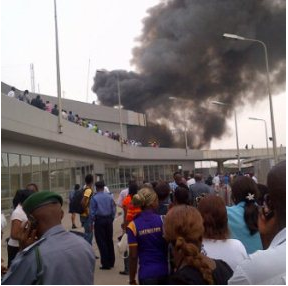 Sources say the fire was a result of an electric surge which started on the second floor of the terminal in the Federal Airport Authority of Nigeria (FAAN) commercial department.

The fire was stopped in time before it could spread to any other part of the building.
Posted by Funke Mercy at 1:59 PM