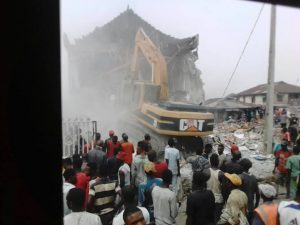 The Lagos State Government, on Monday, commenced the demolition of structures in Agege Pen Cinema for the construction of a flyover.

A resident, who pleaded anonymity, said they had since been served quit notice by the state government.

Several buildings which includes eateries, banks were been pull down.

Security operatives were, however, on hand to maintain law and order and control the heavy traffic.