Nigerian Man, Kenny Reveals How He Saves His Wife From Committing Suicide After Spending House Rent 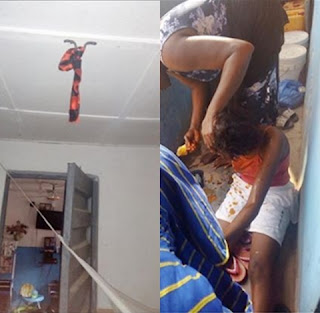 A Frustrated woman who almost commit suicide, has been rescued by her husband.

The woman's husband simply identified as Kenny, revealed that he gave her money to save so they can pay their house rent. He said that on the day which he was supposed to pay, he asked her, and she told him she has spent the money on food.

The man got angry, left he house, when he came back, he saw her tying herself to the fan in a bid to take her own life. 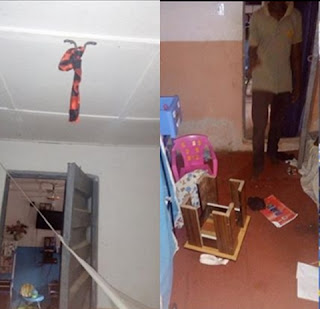 Below is what the man shared on social media.


"My house rent expired last month, so I told my landlord to give me till the end of December to put myself in order because I was thinking of travelling with my family.Before then, I gave my wife 75% of the house rent to keep pending when I will complete it. I just received a call from my office today that salaries are being paid today, besides I am on night duty so it will be till evening before I will receive mine.
I asked my wife to get the money ready that I am going to compete it today to enable me pay the house rent tomorrow against the deadline which is on 24th of this month, only for her to tell me that she has spent the money on our feeding.
I got angry and yelled at her and called her close friend to ask her where she kept the money. There’s no day I don’t provide for the family, so how come she spent the money on the family?
So after all said and done. I got angry and went out with my 1 year old daughter to cool by temper with a bottle of Hero. Then entering the house I saw her hanged herself. So I rushed and echoed for help. Please, if u are in my shoe, what will u do?"