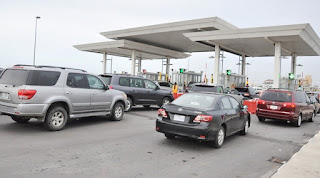 Starting from 1 February, cars plying the Lekki-Ikoyi Link Bridge will have to pay toll of N300, which represents an increase of N50 from the old toll.


The Lekki Concession Company, LCC, had announced a new toll regime last Friday and released the new tolls to be paid by motorists.


A statement issued by LCC on Sunday said drivers/owners of cars and tricycles driving on the Lekki-Epe Expressway would pay N200 toll as against the old rate of N120.


SUV will now attract N250 at the Admiralty Toll Plaza of the Lekki-Epe Expressway, instead of the former N150.


Also, heavy duty trucks/buses with two or more heavy axles will attract N1,000 at the Admiralty Circle Plaza on the Lekki-Epe Expressway, according to the latest statement from the LCC.


The LCC also imposed a 25 percent increase on operators of commuter mini buses intending to use the Admiralty Circle Plaza of the Lekki-Epe Expressway.
Posted by Daniel Update at 8:20 AM