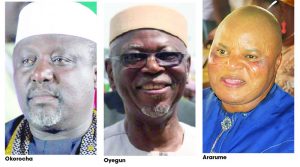 Political activities in Imo State have suddenly picked up. With just 11 months away from the governorship contest in the state, the members of the ruling All Progressives Congress (APC) are in a state of what could be described as “suspended political animation” as all eyes is zeroed on the state governor, Rochas Okorocha, waiting to see who his anointed successor would be.


Ironically, even the opposition parties in the state, especially the Peoples Democratic Party (PDP) are also waiting to see which direction the governor is headed.


Although, Okorocha has said that he would not make the mistake of his predecessors who could not anoint a successor, he has made it abundantly clear that the likes of Senator Ifeanyi Ararume and his immediate predecessor Dr. Ikedi Ohakim will never succeed him.


However, Okorocha may inadvertently be walking on the same path, former governor, Achike Udenwa walked in 2007, by excluding those who are not from his inner political family from the gubernatorial contest. But in spite of Udenwa’s opposition, Senator Ifeanyi Ararume who was regarded as an outsider picked the gubernatorial ticket of the party. However, the stiff opposition from the Udenwa political camp, with the active collaboration from the then president, Olusegun Obasanjo, Senator Ararume was not only denied the ticket, but the PDP ended up having no candidate in that election.


Even when the Supreme Court pronounced Ararume as the authentic candidate of the party, PDP would have none of that. It rather declared that the party had no candidate, a situation that led to the factionalisation of the then ruling PDP ahead of the 2007 governorship contest, a situation that led to the emergence of Chief Martins Agbaso as governor under the platform of the All Progressives Grand Alliance (APGA) before the election was curiously cancelled by the Independent National Electoral Commission (INEC).


However, in the re- run that followed, the PDP having realised its mistakes decided to back Chief Ikedi Ohakim who was also denied the ticket in the PDP, but was running on the platform of the Progressives Peoples Alliance (PPA) with an understanding that “he must return to the PDP after winning the contest.” In the end, Ohakim won and “in keeping faith with the understanding,” he returned to the PDP before the expiration of his tenure in 2011.


Analysts say that the current scenario in the Imo APC is akin to the situation of the Imo PDP in 2007. And that by excluding those who Okorocha said are not “ Ndi Agburu anyi” which literally means “those who are not members of our political family” he appears to have planted the seed of internal cold war in the ruling APC.


Already, Daily Sun gathered, the action has pitched the governor against major stakeholders in the party, which may ultimately be a stumbling block to the APC’s desire to hold on to the state after the election in 2019 .


Okorocha joined the APC with a faction of the Imo state chapter of APGA that are loyal to him during the formative stage of the APC in 2014. But some of the APGA members who had earlier gone with him to APC had either defected back to APGA or the PDP, leaving behind only members of the Congress for Progressive Change (CPC) and All Nigeria Peoples party (ANPP). But after the APC won the governorship election in 2015, many had expected that Okorocha would be magnanimous to concede some political positions to them. He never did as the CPC and ANPP blocs in Imo State were left out in appointments and were never carried along in the affairs of the government.


Owing to the above fact, it was gathered that the old CPC, ACN, and the ANPP members who are the foundation political parties that formed the APC, appear to have also factionalised the party along that line. One of them is Emeka Nwajiuba, the Executive Secretary of Tertiary Education Trust Fundf (TETFUND), a Buhari loyalist and member of the CPC who had played a key role in the formation of the APC in 2014. He had also served in one of the committees that shaped the formation of the APC at the national level.


Nwajiuba who was a member of the House of Representatives and former gubernatorial aspirant of the defunct ANPP was never accommodated by the APC government in the state. Last year, he launched a political group, the Grassroots Liberation Movement which is said to be the rallying point for the old CPC political bloc in the state and ostensibly a counter force to the loyalists of Okorocha in the state and especially in the Okigwe zone.


He is said to be allegedly enjoying the backing of President Muhammadu Buhari for the senatorial seat of Okigwe, while Okorocha has endorsed his current Information Commissioner, Prof. Nnamdi Obiaeriri for the same position as a replacement for Senator Benjamin Uwajumogu who the governor alleged” has not performed creditably well.”


One of the leaders of the Nwajiuba group, said “it is unimaginable how the mother political parties that formed the APC at the centre are been relegated to the background in Imo State. There is nobody from the old CPC, ANPP or the ACN blocs that was accommodated in this government. This has to stop”.


Similarly, Okorocha appears to have also fallen out with Senator Osita Izunaso the party’s National Organising Secretary, as well as Senator Ifeanyi Ararume who had played a strategic role in the supplementary polls that had returned Okorocha to Douglas House.

To compound the internal squabble in the ruling party is the rumour that Okorocha has allegedly anointed his son – in – law and his Chief of Staff, Uche Nwosu from Nkwerre Council of the state from the same Orlu senatorial zone, to succeed him. But the governor’s loyalists have consistently denied the rumour.


Only recently, the governor came out to say publicly that his successor would be produced by the people of the state. But he was categorical on the fact that Ararume and Ohakim would never succeed him, saying that his successor must not be “proud, arrogant, vindictive, greedy and narrow minded or clannish,” adding that if Ohakim succeeds him, “his mission would be for vengeance.“

A party source who spoke on the condition of anonymity alleged that Okorocha has not been funding the party in the state and that the party has almost gone into extinction at the local government areas and wards levels across the state, adding that if the governor does not call for a meeting which is usually held at the Government House, nobody can call for the meeting, not even the state chairman.


According to him, “ the party is almost dead because the governor is not funding the party and that has resulted in the near comatose of the party across the state. If the governor does not call for a meeting nobody does, not even the state chairman. If you go to the state secretariat at Works layout you will find out that the place is always empty because nothing is happening there.”


He added that “the state chairman is always in Government House instead of staying at the party’s office. The only person who has been funding the party especially at the local government level is Senator Ararume and even at that the governor sees him as an opposition to him and has sidelined everybody who identifies with Senator Ararume because he is eying the governorship seat in 2019. Now, that the governor is not on good terms with Ararume who is the political leader of Okigwe. He should know that without Ararume APC cannot win majority vote in Okigwe because those people Okorocha are banking on cannot march Ararume when the election comes, and I think that the best thing is for him to allow the party members to decide who is their gubernatorial candidate will be through the primary election” the source said.


Another party source told Daily Sun that “if governor Okorocha does not change his current tactics, the party will not be able to retain the Douglas House in 2019 as there is no unity among members especially as they are now divided along the supporters of the governor or that of Ararume. This does not augur well for the party especially in a pre- election year.”


He equally pointed out that what would be the final nail on the coffin for the party is the proposed mock primary by the governor, saying that “the mock primaries for all aspirants for elective positions, is viewed by majority of the party members as a ploy by him to foist his preferred candidates on the people.”


“Governor Rochas Okorocha two weeks ago announced that he is going to conduct mock primaries for aspirants to test their popularity and many party members have already said that they will not accept that if he goes ahead to conduct them, as it is seen as a ploy to impose on the people his chosen candidates. I think that what is needed right now is not to compound the problems within the party but to find a way to ensure that there is peace in the party” the party chieftain added.


Given the prevailing atmosphere in Imo State APC, analysts are of the view that Okorocha may be his own obstacle in producing his successor.
Posted by Daniel Update at 8:56 PM