As the conduct of the 2018 Unified Tertiary Matriculation Examination, UTME, inches towards end on Saturday, a primary school teacher, Timothy Samson, has been arrested while impersonating his brother.

Mr Samuel Timothy, a 30 year old teacher, was picked up after the Eagle eyes of security personnel from the Nigerian Security and Civil Defence Corps, NSCDC, and some personnel of JAMB detected that he was not a candidate of the examination he was writing at the Air Mass Computer Institute, in Madalla, Niger State.

He was said to have sneaked into the examination hall to write for his younger brother, Samson Samuel, said to be indisposed following a sudden sickness.

The arrest of Mr Timothy came as the Registrar of Joint Admissions and Matriculation Board,JAMB, Is-haq Oloyede accused parents and private tutorial centre owners of being responsible for mass examination malpractices in UTME.

Oloyede revealed that the board had identified 14 centres across the country involved in malpractice and assuring that the examination body would clamp down on the centres while their operators will be prosecuted.

Timothy, who was paraded Thursday, by the officials of the NSCDC and JAMB at the headquarters of the tertiary institutions’ examination body at Bwari, Abuja, according to JAMB Supervisor at the examination centre, Sakina Tafida, had evaded screening strategies and sneaked into the exam hall.

Tafida said: “But we found that the number of exam slips we collected after fingerprint screening was less than the number of candidates in the hall. He skipped fingerprint device and the photograph on the slip he gave us later was that of his brother, Samson Samuel,” she said.

The arrested teacher, according to Tafida, confessed to have impersonated his brother who was sick. 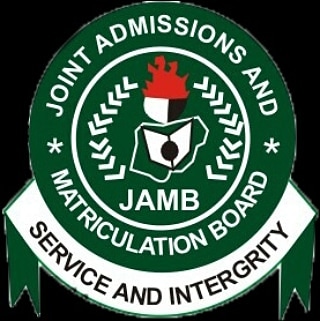 Posted by Daniel Update at 2:41 PM