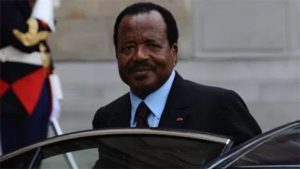 Cameroon’s President Paul Biya yesterday convoked a rare cabinet meeting and vowed to push ahead with a military crackdown on English-speaking separatists in the francophone country.


“The efforts (of the security forces) must be continued, especially to ensure a return of normal economic and social activity,” Biya told the first cabinet meeting held since 2015.


The 85-year-old Biya, in power since 1982, has not yet said whether he will stand for re-election, though his party regards him as “the natural candidate”. On October 1, separatists declared two regions as the self-proclaimed republic of “Ambazonia”, marking a turning point for the country’s English-speaking minority, which makes up around a fifth of the population.


Biya dispatched troops, combat helicopters and armoured vehicles to root out the dissidents, forcing tens of thousands to flee to neighbouring Nigeria. At least 28 soldiers have been killed in the violence, according to an AFP tally, and two state employees have been kidnapped.


The civilian death toll remains unclear, as non-governmental organisations and independent media are barred from the area.


Though the original Ambazonia leaders have dissociated themselves from militant offshoots, they claim their struggle is peaceful but there are a growing number of attacks against the government.


The government early this month created a Ministry of Decentralisation and Development during a cabinet reshuffle. Decentralisation has been one of the key demands of separatist moderates, while more radical activists are demanding complete independence.