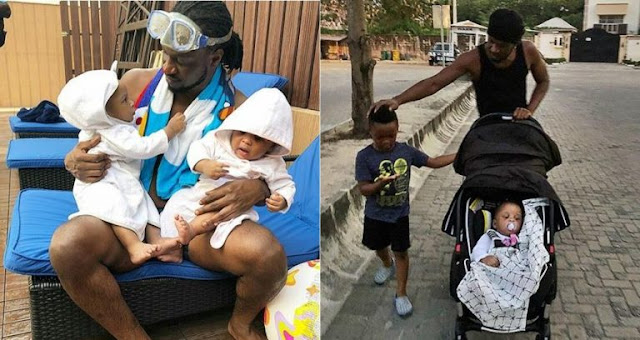 Singer, Paul Okoye is clearly enjoying fatherhood as he has been pictured on several occasions handling his daddy duties with ease and class.

He continues in to serve us some hot daddy goals as he shares pictures of himself taking his children for a walk in the streets.

Paul Okoye of former P-Square group, who had few months ago, welcomed a set of twin boy and girl with his wife Anita, at a hospital in Atlanta, United States, has shown off his bundles of joy as he plays his fatherly role.

He was pictured some days back having a great time with his kids beside the pool.

The father of 3 kids, who is popularly called Rude Boy, took to his Instagram page to share some adorable photos of himself and his twins – Nadia and Nathan – as well as his first son, as they go for a stroll in the streets of Lagos.

He posted the photos and captioned them: “Men @ work that’s how we roll. #eveningstroll.”

Posted by Daniel Update at 4:09 AM