I didn’t throw a birthday party for my daughter, it was just a photoshoot – Maryam Sanda 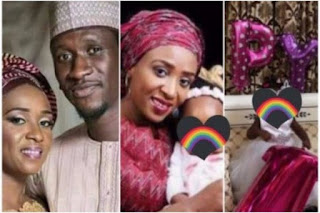 The family of Maryam Sanda, lady accused of killing her husband, has spoken out after many criticized the accused for throwing a birthday party for her daughter shortly after she got granted bail.


Maryam Sanda, who is the daughter of Maimuna Aliyu, a former Aso Saving Bank executive, was arraigned by the police for allegedly killing the son of a former PDP Chairman, Mohammed Bello. She was granted bail on health grounds at an Abuja Federal High Court on March 3rd, 2018,

She reportedly organized the party at her mother’s residence on Thursday, and the event was attended by close family members. However, her family has clarified the public that the pictures they saw were not pictures of a birthday party but a birthday photoshoot.


Read a copy of the statement mailed to Vanguard below.

“Due to recent events regarding the celebration of an innocent child’s first birthday, we her maternal family have decided to speak out because of what we consider a calculated and malicious effort by certain quarters to ruin the happiness of an innocent child just to destroy her mother”, she said.

Let us start by saying that the pictures shared on social media of Maryam Sanda and her beautiful daughter Aleesha which were claimed to have been taken on Aleesha’s birthday is false. Just by mere comparison of recent and old pictures of the little girl, it will become apparent that Aleesha was a lot younger at the time when the picture was taken. (For the purpose of clarity, the picture in question was taken on the 8th of July, 2017 when Aleesha was only 5 months old as it is our family tradition to take her pictures every month). We have attached the photos showing dates from the studio with a time stamp.

On the 8th of March, 2018, Aleesha turned 1, and her maternal grandmother (our mom) considered it necessary and in the best interest of the innocent child to organize a photo-shoot for her (especially as Aleesha had not had her traditional monthly photo-shoot ever since the incident that befell her family).

The picture of Aleesha with cake and balloons which subsequently emerged on social media was a photo-shoot and not a birthday party as was falsely reported by various blogs and media houses. This photo-shoot happened while her mother was on bed rest and only as to have something to remember her first year in this world, hence, you will not find any picture of Aleesha with anyone (not even her own mother) on that day.

What sort of birthday party could have been organized without children and other party guests? The photo-shoot was an in-house event and the picture was only sent to Aleesha’s paternal Aunt Kilo in Kebbi state. It is, however, strange to us how anybody (especially those who pretend to love and care for Aleesha) would have maliciously misrepresented the story and even sold it to the media with such caption and message.

It is unfortunate that none of those media houses (not Vanguard) reached out to us to ask questions before jumping on such wicked misinformation as has been the pattern ever since the death of Aleesha’s father.

We understand that everybody wants justice; we too want justice but we will appreciate if the innocent girl is left out of the problems, lies and deceits of adults while her mother goes through the process which has already commenced”.