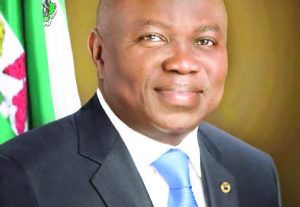 The senators, who passed a vote of confidence in the governor, said the giant strides of his administration were being felt across the state.

The senators, including Gbenga Ashafa (Lagos East); Oluremi Tinubu (Lagos Central) and Solomon Olamilekan (Lagos West), who paid a visit to the governor at Lagos House, Ikeja, on Sunday, said they were proud of his achievements and the renewed vigour he has brought to bear since he assumed office.

Reading a letter of endorsement on behalf of his colleagues, Ashafa said Ambode has, beyond reasonable doubt, proved his mettle to lead the state to greater heights, citing massive infrastructure development, strategic solutions to gridlock as well as key interventions in various sectors in the last 33 months.

“Since May 29, 2015, when you took the mantle of leadership and administration, you have made it clear that you are out to deliver on all your campaign promises. Looking back today, we, senators representing the three senatorial districts of Lagos State, are proud of your achievements and the renewed vigour which you have brought to the public service of Lagos State.

“We are proud of the infrastructure development that you have brought to the entire state in general and to our districts in particular. Your smart solutions in tackling the traffic and security challenges which initially faced your administration have become template for other states to copy,” Ashafa said.

On her part, Tinubu commended Ambode for turning every part of the state into a huge construction site and as well working to improve the lives of the common man.

Also, Olamilekan said the vote of confidence in the governor was due to the good works he had done, so far, adding that it was also to urge him to continue to do more.

Responding, Ambode said he was humbled by the collective endorsement of the senators and assured them that he will continue to give his best for the development of the state.

“I am seriously humbled by the collective presence of the three distinguished senators from Lagos in the State House this evening. I must also say this is a sign that there is huge political stability in this state, and to also let the people know I am humbled by the desire of the senators that I continue with all the things I have already done for Lagosians,” Ambode said.

In a related development, Chairmen of 20 local governments (LGs) and 37 local council development areas (LCDAs) of the state have unanimously endorsed Ambode for a second term.


The council chiefs, after a meeting with Ambode at the Lagos House, Alausa, Ikeja on Sunday, said their decision to support the governor for another term was on account of his massive infrastructural renewal and transformation of all parts of the state.

Chairman of Conference of LGs and LCDAs in the state, Omolola Essien, said Ambode’s achievements are visible to all.

Essien, who is also chairman of Lagos Mainland Local Government, said the unanimous endorsement of Ambode would be the second time the council chiefs would do such, having endorsed him earlier, individually.

Source: The Sun
Posted by Daniel Update at 10:17 PM