Melaye responds to reports that he has fled Nigeria 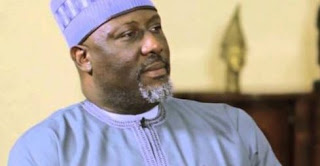 Dino Melaye, the lawmaker representing Kogi West Senatorial District, has responded to reports that he has fled Nigeria over his running battle with authorities in the country.

Melaye dismissed the reports as false in a statement he issued on Saturday night.

The Kogi senator was specifically reacting to a report by an online news medium, in which he was reported to have fled the country and allegedly threatened to implicate President of the Senate, Bukola Saraki, and over 30 senators if they failed to rescue him from his travails.

He said, “For the records, I did not flee Nigeria and have no reason to flee my country, leaving behind my family as the online paper wants Nigerians to believe. My attention was drawn to their lies this night, hence this public statement.”

Melaye also said he had yet to receive any court summon either in person or by proxy in his house or office for him to appear on March 28 as being insinuated by the police on the latest allegation against him.

He added, “It has become expedient for me to issue this statement to the public and to let you know that I have taken the matter up with the international community in order to report this undue intimidation and harassment.

“Let me reiterate here for the umpteenth time that no amount of intimidation, blackmail, arrests or threats will stop me from championing the cause of the masses.”