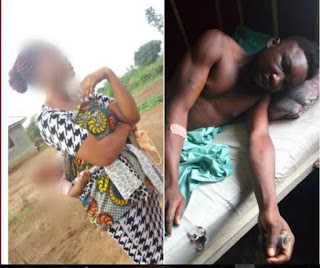 The Father of a six months old baby girl is currently in police custody in Edo state after he attacked a 39-year-old man who defiled his child.

The human rights activist, Prince Harrison Gwamnishu, who shared the sad story online, said the father caught the accused inserting his finger into his six-month-old baby’s vagina. In anger, he attacked the suspect with a machete.

Eh, so why is the father in the Police station? How dare this animal insert his finger inside a 6months old child? He should be in a police cell, not a hospital.


Read what Gwamnishu wrote below


I traveled to Edo State where I facilitated the arrest and detention of two Igbenedion University Students who drugged and raped a female student and still threatened to eliminate her. The students are now in detention.

Another one that shock me is the defilement of 6months old baby by 36 year old man. He was caught in the ACT inserting his finger. The baby’s father cut off his leg with a machete.

BBI was invited to help secure the release of the Baby’s father.


The man informed us at the station that he cut off the leg out of annoyance and said he wants to withdraw the charge (Defilement) against the man to regain his freedom.

The Baby’s father wants it 50-50…he wants to be freed and also the man who defiled her 6 months daughter freed from the charges. Are you mad? I asked him…. What should we do?
Secure his release? OR get Justice for the little baby……….BBI is against Jungle Justice. Don’t take laws into your hand… Report to the appropriate Authority. 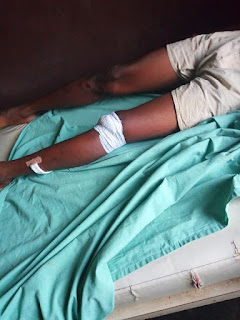 Posted by Daniel Update at 9:08 PM