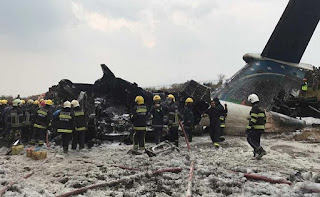 Nepali rescue workers have been scrambling to look for survivors in airplane crash near Kathmandu airport on Monday.

There were 67 passengers and four crew on board the US-Bangla Airlines plane from Dhaka.

Eyewitnesses reports described seeing the plane flying at low altitudes before crashing onto a football pitch at Nepal’s only international airport in the capital, Kathmandu.

Amanda Summers, an American who works in Nepal, watched the crash happen from the terrace of her home office.

“It was flying so low I thought it was going to run into the mountains,” she said.

She said it was unclear if it had reached the runway when it landed. “All of a sudden there was a blast and then another blast,” she said.
Posted by Daniel Update at 10:34 PM