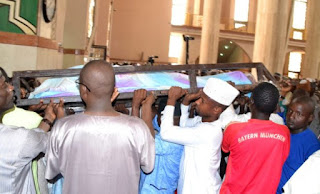 A member of House of Representatives, Mr. Mohammed Sani-Abdu, on Tuesday revealed how the late Senator Ali Wakili died.

According to him, Wakili had got dressed and ready to travel to Yola, Adamawa State, to attend the wedding of the daughter of the Secretary to the Government of the Federation, Mr. Boss Mustapha.

But, before leaving the house, Sani-Abdu who spoke on the floor of the House, said the late senator asked his wife to prepare a meal for him to eat.

He spoke further, “This is why we have to continue to appreciate our wives. His wife received the first shock.

“She prepared porridge and brought it for him to eat. But Wakili told her he wanted something light instead, like tea.

“She went back to get the tea, only for her to return and find her husband slumped on the floor.”


Sani-Abdu recalled how he personally washed the late senator and prepared his body for burial, having been told what happened.

He added, “The wife is a very courageous woman. I asked her whether she would be strong enough so that I could remove the cloth from his face for her to see the husband for the last time.

“She agreed. You know, people are somehow afraid of dead bodies. But, this woman did not only hold her husband, she prayed for him and tightly embraced the body.

“She did not want to let go of the body. It took some women, who had strength, to pull her away from Wakili.

“Immediately she was separated from him, she fainted and people had to bring water to pour on her. She took the first shock.”

The session was presided over by the Speaker, Mr. Yakubu Dogara, who hails from the same district as Sani-Abdu and Wakili.

The House observed a minute’s silence in his honour and later shut the plenary till Wednesday after praying for Wakili’ soul.
Posted by Daniel Update at 4:44 AM