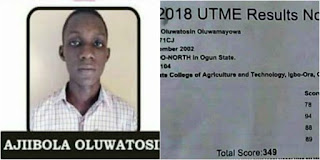 A 15-year old identified as Ajibola Oluwatosin Olumayowa, a student of Taidob College in Abeokuta has emerged ‘best candidate’ of the Joint Admission and Matriculation Board (JAMB). This is coming after the release of this year’s Unified Tertiary Matriculation Examination (UTME).


A Corona Secondary School student, Ibukun Oduntan, had earlier this week been declared the best candidate with 344 marks when results were released but Taidob College Asero Estate, Abeokuta, Ogun State on Wednesday, disclosed that its student, Ajibola Oluwatosin Olumayowa emerged with the highest score of 349.

Via a statement released and signed by one Dare Adedotun;

“Ajibola Oluwatosin from Egbado North, Ogun State recorded 78 in the Use of English, 94 in Mathematics, 88 in Physics and 89 in Chemistry. Giving a total of 349.”
Posted by Daniel Update at 9:28 PM