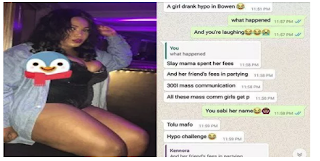 
The slay queen identified as Tolu Mafo, has reportedly been hospitalized after she attempted to commit suicide by drinking Hypo.

The student of Mass Communication department attempted the seemingly fast escape route on her own life, after she failed to pay up debts she was owing.

It was gathered that she is a well known slay queen in the school and had spent her Fees, alongside two of friends fees at a ball party held in Lagos and also spent more at Trade fair.

She initially lied about it, but when her friends heard the truth, they gave her a deadline, which she failed to meet

Details on the decision of the school and the parents of the lady in question remain sketchy as at the time of this report, however, she was fortunate to have survived the suicidal attempt Posted by Daniel Update at 8:27 AM