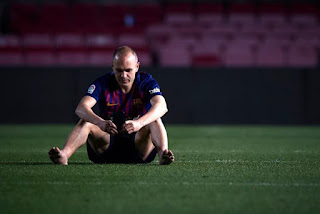 With the topic of mental health coming to the fore in recent times, Barcelona legend Andres Iniesta has revealed that he battled with depression following the passing of his friend Dani Jarque.

He said Jarque’s death at such a young age (26) had a profound impact on him and removed his zest for life.


Speaking to Antena 3TV, he said; “You feel that it’s not you, that you don’t enjoy things, that the people around you are just people,”

“You have no feelings or passion.

“You end up feeling empty inside and there is a moment that you realise that you cannot take it anymore.

“I had the ability to see that I needed to see someone to get out of that situation. The important thing is that in that period I never lost the spark.”

Iniesta is going to his last world cup and is hopeful that Spain does much better than in 2014 where they were knocked out in the group stage.

“We have a good team, a good mix of young people and those with more experience,” he said.

“We will go with a lot of expectation, I think we had two warnings at the European Championships and in Brazil which means that we have our feet on the ground.

“We will go step by step and we do the things right then we will be fighting for the title.”
Posted by Daniel Update at 1:20 PM