‘IPOB’s “stay at home” order has brought the east to a standstill, these brave young freedom fighters are martyrs and heroes’ – FFK says 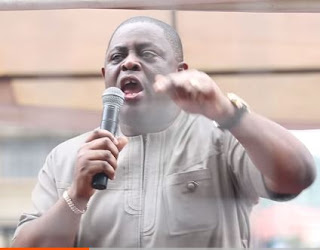 Yesterday, residents of Enugu, Abia, Ebonyi state complied with the Sit-at-home order issued by the Indigenous People of Biafra, IPOB.

The group ordered their members to sit at home to remember their leaders who died in the struggle for the actualization of Biafra.

Reacting to the situation, former aviation minister Femi Fani Kayode described them as ‘martyrs and heroes’.

According to him, ‘IPOB’s “stay at home” order has brought the east to a standstill. These brave young freedom fighters who have continued to resist the tyranny of @MBuhari by peaceful means have won the respect of the world.They are martyrs and heroes.God bless my friend and brother Nnamdi Kanu!’. 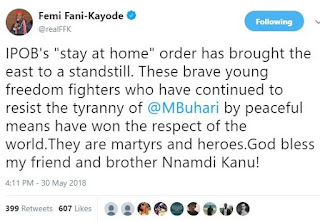