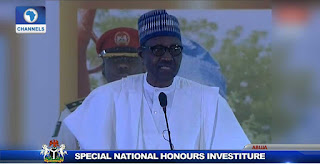 President Muhammadu Buhari has apologised the presumed winner of the June 12, 1993, presidential election, Moshood Kashimawo Olawale Abiola, for his travails after the election.

The president gave the apology after conferring the title, Grand Commander Of the Federal Republic on Abiola.

Although the 1993 general elections received widespread acclaim and have been adjudged as the freest and fairest elections in Nigeria’s history, military Head of State at the time, General Ibrahim Babangida annulled it.

But Chief Abiola who contested under the Social Democratic Party and held a massive lead at the polls before the annulment insisted on his mandate and that the outcome of the election be upheld.

As a result of his fight for justice, military President General Sani Abacha jailed him in 1994 after he declared himself the lawful president of Nigeria.

Despite calls in Nigeria and abroad for his release he was not released from prison and died incarcerated on July 7, 1998.
Posted by Daniel Update at 7:28 AM