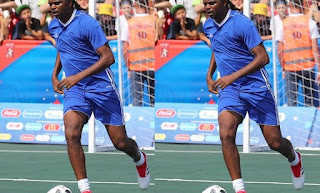 Arsenal legend Nwankwo Kanu had £8,250 in cash stolen from his suitcase in Moscow after he arrived from London.

Russian police said it was taken by two loaders at Moscow’s Sheremetyevo Airport.

Kanu, 41, reported the money missing when he reached Kaliningrad, where he was playing in a World Cup curtain raiser game organised by Fifa.

Lt-Col Irina Volk, spokeswoman for the Russian Interior Ministry, said the loaders were dealing with the baggage from a London to Moscow flight.

Kanu, travelling on a British passport, had appealed for help to police in Kaliningrad.

Volk said: “The stolen cash was removed [by the loaders] and will soon be returned to the owner.”

A Russian source reported: “The World Cup has not even begun yet, but world soccer celebrities already require the help of Russian police.”

The loaders, aged 30 and 36, face criminal investigation and could be sent to jail for up to six years.
Kanu played alongside ex-Manchester United and England star Wes Brown in a Fifa legends team against a Russian legends side.

The ex-Arsenal man, a former Nigerian international, did not mention the theft in speaking to the media in the Baltic city, where England will play on June 28.

He said: “Kaliningrad is a very nice city with very nice people.

“It’s really good to be here. The stadium is fantastic, I liked the atmosphere inside and also enjoyed being in the players’ dressing room.

“The pitch is marvellous and, actually, that’s all you need as a player.

“The Fifa World Cup is the greatest football tournament on the planet – every team dreams of being part of it and I am sure it will be a very special event in Russia.

“Nigeria will be a big surprise, for sure. We have good young and talented players; they are hungry for victories and want to do well – for themselves and for the country.”

Former Red Devil Brown added: “As soon as you get off the plane here, you can see that Russia is a beautiful part of the world.

“We did some sightseeing today in Kaliningrad and it was tremendous.

“We also went to see Kaliningrad Stadium, where England will face Belgium.

“It’s a modern arena and you can see that it’s going to be very loud inside, and I am sure the fans will enjoy it very much.

“Obviously, I will support England at the World Cup and hopefully they do as well as they can and enjoy the games and do not let the pressure get to them.”