Family dresses up dead boy, surrounds him with favourite snacks for memorial service 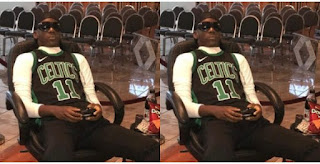 The body of a dead teenager, Renard Matthews, was dressed and propped up in a chair while surrounded by his favourite snacks for a bizarre memorial service held by his family.


Matthews, 18, was shot in the head in June while he walked his dog in New Orleans, USA, reports Mirror UK.

His heartbroken mum, Temeka, described the football-loving student as a ‘homeboy’ who loved playing video games.
As part of an unusual memorial to the dead teenage

He was placed in front of a television with a games console controller in his hand while surrounded by his favourite snacks at the Charbonnet Labat Glapion Funeral Home.

Renard was also pictured wearing his favourite player socks in a scene made to look like a typical, family home.

New Orleans Police Department said officers found a boy at the scene with a gunshot wound to the head.

He was also reportedly robbed of his mobile phone.
Posted by Daniel Update at 1:53 PM