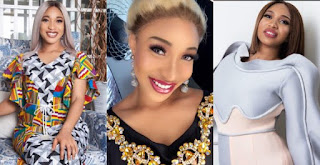 Nigerian actress Tonto Dikeh has announced that her first name as officially changed from Tonto to ‘King Tonto’, a moniker she has been going with.


“BEAR WITH ME WHILE I OPT FOR GREATNESS..
#KINGTONTO #KINGSHIP #ARGUE WITH YOUR BANK ACCOUNT
(Na joke ooo I ain’t prouding Ooo #DROPS MIC”

The name has been her Instagram handle for a while and she has already been known by that name by a lot of fans. She announced the name change yesterday with a photograph of her voter’s card.

Tonto Dikeh is one of Nigeria’s most popular faces, owing to her reel of intense roles and characters such as ‘Wild and Dirty’, ‘Family Disgrace’ and a bunch of other racy movies. Her personal life too has been a source of scandal and entertainment- after a messy divorce from her ex-husband, she started a reality show that details all the drama that her life is made up of.
Posted by Daniel Update at 10:41 AM