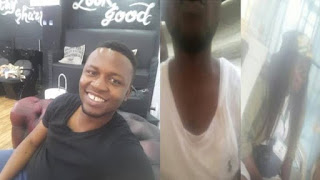 A male youth corper identified as @oluwasevn on Twitter called out a female corper earlier today, after she reportedly sexually violated and physically assaulted him.


According to him, while corpers were dancing and chanting ”Hold something” during their early morning MAN O War drill, Peace, a graduate of Ambrose Ali University, came unto him and touched his pen!s twice. He reacted by trying to slap her but claims she managed to dodge it.

She then charged towards him in a bid to initiate a fight but was held back by other corpers present.

Peace later got her revenge as she slapped him at mami market while he was waiting to have his breakfast. This prompted the male youth corper to formally report the case to the camp authorities.

Read his Tweets below..

Posted by Daniel Update at 7:21 AM