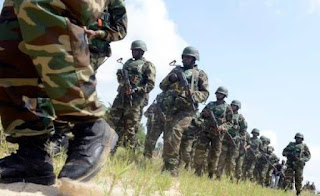 The Nigerian Army has deployed a special forces team to Benue, Nasarawa and Taraba states.

The team would help prevent the increasing cases of herdsmen attacks and secure vulnerable communities in the three states.

A late-night tweet from the official Twitter account of the Presidency said, “@HQNigerianArmy has deployed Special Forces To Benue, Taraba and Nasarawa States to secure vulnerable communities and prevent further attacks.”

Gunmen suspected to be Fulani herdsmen had stormed communities in Guma and Logo LGAs of Benue between December 2017 and January 2, 2018, killing no fewer than 50 persons.

The Army through its spokesman, Brig.-Gen. Sani Usman also confirmed the deployment of the troops.
Posted by Daniel Update at 7:22 AM