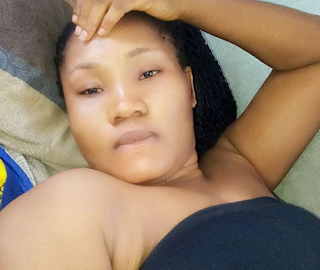 A Nollywood actress, Angel Christopher has taken to Instagram in an attempt to change the orientation she believes Nigerians have about sex. According to her, people associate sex with Satan and darkness, whereas the Bible spoke of how sex is holy within the confines of marriage. Read her words below.


”A lot of people don’t associate sex with God – they associate it with Satan and darkness, as if sex is not holy.!! The bible is explicit when it comes to sex. Sex is holy within marriage, and there is no prescribed style. Nowhere in the Bible does it say that the missionary position is the only sexual style. Not discussing sex in a marriage is a bad thing. Women wake up from your slumber, if he’s not doing the styles with you, he’s definitely doing it with someone else, gone are those days when they say the way to a man’s heart is through his stomach, now is the way to a man’s heart is how you respect and satisfy him in bed.. Men love sex!!!! #Gudnyt”


This is the second time a Nollywood actress’s opinion about sex is making headline in the space of a week. First it was Bukola Awoyemi, popularly known for her role in the hit movie Arugba, who shed her opinion concerning men and the trending talk of sex dolls. The Yoruba actress stated that if she ends up marrying a man with cheating genes, she would rather prefer he cheats on her with a fellow human like her, instead of a sex doll. She says sex dolls are inanimate objects, so therefore it is inhumane to have sex with one. Her quote below.


“I never wished for a man that will cheat on me when I get married but if I end up with one with cheating genes in his blood, I would prefer him to cheat on me with a human being than with an object. The reason is simple, it is just inhuman to have sex with an object. Sex dolls are inanimate objects, as far as I am concerned,” 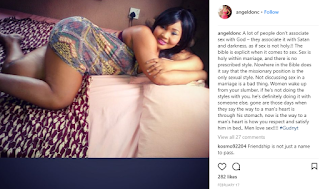 Posted by Daniel Update at 2:10 AM