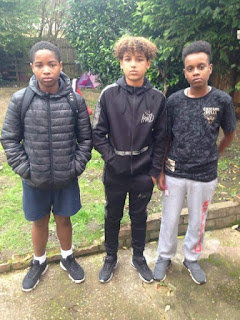 Three brave schoolboys have been hailed as heroes after managing to stop a man from hanging himself from a high bridge.


According to a report by The Sun UK, The boys, Devonte Cafferkey-Wilson, Sami Farah and Shaun Young, all of Waltham Cross, Hertfordshire, did not hesitate when they spotted the troubled 21-year-old man on the wrong side of the bridge’s safety barrier with a rope round his neck and preparing to jump.


Aged 13, 14, and 12 at the time, the trio rushed to the barrier and managed to grab the man’s legs through the railings while Shaun ran to get a woman, Joanne Stammer, 47, who was passing by, to come and help.


She joined the other boys putting her arms through the barrier and round the man’s waist to pull him back.


Then James Higlett, 39, also of Waltham Cross, arrived at the scene and helped the others to hold the man who was struggling to get free until police and the fire service arrived to get him to safety.


The incident took place in September last year, and now the rescue heroes have all been awarded Royal Humane Society Certificates of Commendation.

They were given the awards following a recommendation from Hertfordshire Police who have said the man would certainly have died but for the swift action taken.


Andrew Chapman, Secretary of the Royal Humane Society added his personal praise he announced the awards at the Society’s London headquarters he said: “There is no doubt that without the quick thinking and action of the three boys the man would have jumped and would have died.


“They were the right people in the right place at the right time and showed tremendous presence of mind in acting as they did particularly bearing in mind their ages.


“All too often these days we hear stories about misdeeds by youngsters.


“If ever there was a story to balance up the bad ones this is it. These three excelled themselves.


“Their parents, their schools and everyone else should be incredibly proud of them.


“The two adults also played a major role in this harrowing incident and just like the boys, richly deserve the awards they are to receive.”
Posted by Daniel Update at 9:24 PM