APC Crisis: Why I Made Sure Saraki Became Senate President In 2015 – Atiku 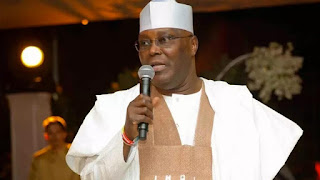 A former Vice President, Alhaji Atiku Abubakar, has revealed that he backed Bukola Saraki to become the President of the Senate in 2015.

The Peoples Democratic Party, PDP’s presidential aspirant, in a tweet Yesterday Wednesday, declared that he was one of those behind Saraki’s emergence.


Saraki emerged as the Senate President in 2015 against the will of the leadership of the All Progressives Congress, APC.

Atiku has since decamped from the APC back to the opposition PDP.

There are also feelings that the Senate President may lead his supporters out of the APC soon as he announced the defecting of over 13 Senators to the PDP yesterday.

“On June 9, 2015, I supported Senator @bukolasaraki’s bid for the presidency of the Senate,” Atiku wrote on Wednesday.

“I did so in light of the emerging lack of transparency and tyranny within the APC leadership. Today’s events have justified my position.”
Posted by Daniel Update at 6:12 AM