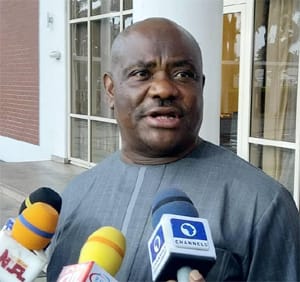 Wike, during a thanksgiving service in Port Harcourt to draw the curtains on the third year anniversary celebration of his administration, boasted that the All Progressives Congress, APC, would have no room to re-enact the perceived Ekiti political robbery in Rivers State.


He said: “Don’t be worried about what happened in Ekiti State. We are prepared. It will not happen here in Rivers State. I have never experienced that kind of robbery in politics.

“I told my colleagues, don’t give them any chance. Most of them in APC are hoping they will repeat the same in Rivers State. We are waiting. Let your spirit not be down, work hard and victory will be ours.”

On the value of the two months long 3rd anniversary celebration, Wike said: “We made sure people who have eyes see what we have done for the state, except those who are blind, for which there is nothing we can do about it.

“We will continue to do the best for the people of Rivers State. The people deserve the best. In the remaining one year, we will not stop doing projects, irrespective of the elections.”

Governor Wike urged the people to continue to support his administration.

Archbishop, Province of Niger Delta, Most Rev. Ignatius Kattey, who presided at the thanksgiving, lauded Wike for his outstanding developmental strides, saying the governor has graduated from “Mr Projects to Doctor Projects.”

Co-Adjutor Bishop of Anglican Diocese of Niger Delta North, Rt Rev Wisdom Ihunwo, prayed for God’s continued blessing on Wike’s administration, noting that the government’s source of strength is from above.
Posted by Daniel Update at 9:02 AM