“I jumped into the bush and started running” – Dino Melaye confirms he was not abducted, narrates attack 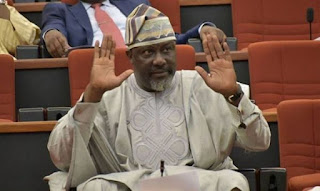 Last week, Senator Ben Murray-Bruce shared a tweet alleging that Senator Dino Melaye representing Kogi West Senatorial District had been abducted. About 24 hours later, Melaye resurfaced on the internet thanking God for saving him from “a dangerous attack” and announcing that he spent “11 hours in the wilderness”.


Following the drama, the embattled Senator in an interview with Premium Times has shed some light on the incidence that led to his disappearance on Thursday, July 26.


According to Senator Melaye, he was travelling from Abuja to Lokoja for his court appearance that fateful Thursday morning when three vehicles intercepted his own vehicle shortly after passing Gwagwalada. His attackers tried to open fire on his vehicle but discovered it was bullet proof, leading them to find an alternative.


He said, “They started shouting that they wanted to burn me, they said ‘burn him, burn him down,’ and crossed the road to look for tyres to set the vehicle on fire”. As the attackers searched for tyres, he instinctively fled his car and made his way into the bush as he feared for his life.

“I jumped into the bush, and I started running, they pursued me and I was able to outmanoeuvre them and climb a tree. I was on top of the three when I saw them run past looking frantically for me. When they didn’t find me, they also ran back.”, Melaye narrated.


He added that he spent 11 hours in the bush trying to find his way out while also ensuring he was no longer at risk.

Senator Melaye described the attack vehicles as “two Toyota Hilux trucks and a Toyota Sienna minivan”, although he admits he would not be able to identify the attackers in the event of an arrest and parade.

He also added that the attackers were sponsored by the police and called on Nigerians to disbelieve the erroneous claim that he staged the incidence describing it as “illogical”.
Posted by Daniel Update at 10:36 AM