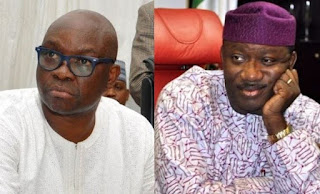 Ekiti State Governor, Ayodele Fayose, yesterday told the governor-elect, Kayode Fayemi that he remains the governor of the state until October 16, 2018.

He was responding to Fayemi’s statement, warning the management of College of Education, Ikere- Ekiti against alleged recruitment.


Fayemi had asked the school authority to stop conniving with Fayose to embark on illegal mass employment in exclusive favour of the governor’s supporters.

In a statement by his media aide, Wole Olujobi, he cautioned the management of the college to steer clear of alleged contrived sabotage mission by Fayose to cripple the incoming administration of the governor-elect.

But media aide to Fayose, Lere Olayinka, said the governor would carry out all the functions of his office until October 16.

He added that if there was the need to employ workers, he would do so legally and no one could prevent him from doing so.

He said: “This is more so as the process of employing 2,000 workers had commenced even before the July 14 election. Therefore, Fayemi and his ignorant team should wait till October 16 before starting their usual anti-people policies.”

The governor also asked Fayemi and his men to rather concentrate on how to defend the false electoral victory awarded them by the powers that be in Abuja, instead of his daily display of idiocy.

According to him, they have watched with amusement the way and manner in which the beneficiaries of the Ekiti electoral robbery have been running their mouths in the last few days and have opted to react to their advertisements of expertise in political comedy.

Meanwhile, the state chapter of the Nigeria Labour Congress (NLC) has urged Fayose to honour his promise of paying all outstanding salaries of workers in the state before leaving office.

In a statement jointly signed by the NLC chairman, Ade Adesammi and his Trade Union Congress (TUC) counterpart, Odunayo Adesoye, the unions advised Fayose to also consider paying the outstanding gratuities, pensions, salaries and deductions before his tenure expires.

The unions, however, commended him for his efforts in the state over the years and wished him success in his future endeavors.
Posted by Daniel Update at 9:40 AM