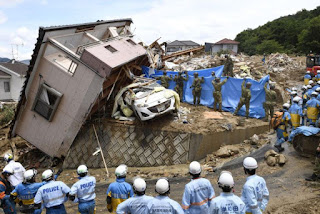 Japan has been battered by the worst flooding disaster in the country since 1983 with 114 dead and 61 more missing after torrential rain unleashed floods and landslides.

Rescuers in Japan dug through mud and rubble on Monday, racing against time to find survivors as Prime Minister Shinzo Abe cancelled an overseas trip to deal with the disaster which has forced several million people forced from their homes.

While officials say the economic impact of the disaster cannot be ascertained yet, Rain tapered off across the western region on Monday to reveal blue skies and a scorching sun that pushed temperatures above 30 Celsius (86 Fahrenheit), fuelling fears of heat-stroke in areas cut off from power or water.

According to a resident whose home in the city of Mihara, in Hiroshima prefecture, has been without water since Saturday Yumeko Matsui,

“We cannot take baths, the toilet doesn’t work and our food stockpile is running low,”

“Bottled water and bottled tea are all gone from convenience stores and other shops,” said a 23-year-old nursery school worker at an emergency water supply station.

According to NHK, a public television station, about 11,200 households had no electricity, while hundreds of thousands had no water while the death toll reached at least 114 with 61 people still missing.

Although the persistent rain had come to an end, officials still warned of sudden showers and thunderstorms as well as more landslides on steep mountainsides that had been saturated over the weekend.

Japanese Prime Minister Abe had to cancel his trip to Belgium, France, Saudi Arabia and Egypt because of the disaster; He was due to leave on Wednesday.

Japan takes its environment seriously and monitors weather conditions and issues warnings early, but its dense population means every bit of usable land is built on in the mostly mountainous country, leaving it prone to disasters.
Posted by Daniel Update at 11:11 AM