Politicians Are Blackmailing Me Over Herdsmen/Farmers Crisis, Says Buhari 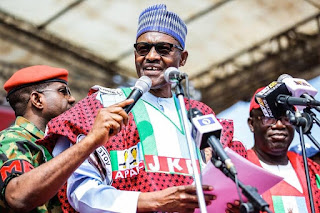 President Muhammadu Buhari has again accused politicians of cheap blackmail over the recent killings and clashes between herdsmen and farmers in the country.

Buhari noted that these politicians are denting his image with claims that he has remained silent over the killings across the country because he belongs to the Fulani tribe.

He said this on Tuesday in Ekiti State, during the All Progressives Congress (APC) rally for Kayode Fayemi in forthcoming July 17 governorship election.

“May I again clear the air on the issue of herdsmen and farmers conflict. Many politicians in their mischievous attitude have been blackmailing me and the APC-led administration purporting that I have not taken any action on the issue because I am a Fulani man. This is a cheap blackmail.”

The President, however, added that he is committed to his oath of office of protecting lives of Nigerians.

“The protection of lives and properties of Nigerians is my responsibility. This I have vowed to do and will stick to the oath of office. I assure you that measures are been taken to ensure lasting solutions,” he said.


Earlier this week, the Presidency announced that there is evidence that some politicians are involved in the killing of innocent citizens who died as a result of the crisis between herdsmen and farmers in the country.

The Senior Special Assistant to the President on Media and Publicity, Garba Shehu, said President Buhari indicated lately, there is evidence of the involvement of some politicians using criminals to perpetuate the killings.

While canvassing for votes for Fayemi, President Buhari said the Federal Government is committed to the welfare of Nigerians and will never play politics with the welfare of anyone.

“In spite of the fact the current administrations in Ekiti State and the Federal Government belong to opposing political parties, we have always ensured a fair share in the allocation of resources and federal projects.

“We will never play politics with the welfare of the people of Ekiti or any other states, regardless of the partisan affiliation of the government of the day.”

Source: Channels
Posted by Daniel Update at 4:59 AM