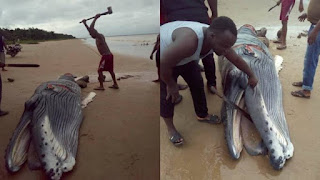 A baby Whale was found on the shores of Obotobo 1 Community of Ogulagha Kingdom in Burutu LGA, Delta State and was killed by residents.

A whale was also killed in the boundary between Ese-odo/ Ilaje LGA in Ondo state, early this year. It was grounded on shallow sea shore.

Locals were seen posing with the mammal as well as shapening their cutlass and other materials dissect it for consumption.

Whales are a widely distributed and diverse group of fully aquatic placental marine mammals. They are an informal grouping within the infraorder Cetacea, usually excluding dolphins and porpoises.

Despite living in the water, whales breathe air. And like humans, they are warm-blooded mammals who nurse their young.
Posted by Daniel Update at 9:44 AM