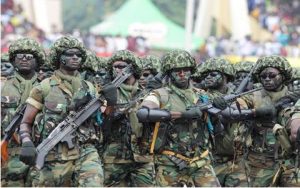 A new Theatre Commander, Operation LAFIYA DOLE, Maj.-Gen. Abba Dikko has taken over the leadership of the command.


Gen. Dikko is the sixth commander of the three-year-old counter-insurgency operation outfit.

He took over from Maj.-Gen. Rogers Nicholas who assumed the command leadership of the command early December 2017.

Gen. Nicholas’ tenure at the Command experienced increase in Boko Haram attacks including the last Christmas daring attack on Maiduguri, ambush of troops in Borno central town of Bama and attack on military Base in Jirri, Yobe State, where scores of soldiers were killed.

Gen. Nicholas thanked the Army chief, Lt.-Gen. Tukur Buratai for giving him the opportunity to serve.

He said he was confident the new Commander would excel having been in the theatre for few months as commander of Operation LAST HOLD.
Posted by Daniel Update at 10:51 AM