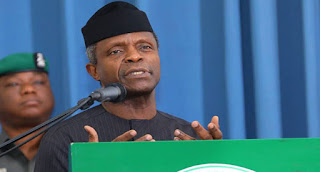 The Acting President, Professor Yemi Osinbajo, has condemned what he described as an unauthorized takeover of the national assembly complex by security operatives on Tuesday.

In a statement by his spokesman Laolu Akande, the acting president said the act was a gross violation of constitutional order, rule of law and all acceptable notions of law and order.

According to him, the unlawful act which was done without the knowledge of the presidency is completely unacceptable.

Consequently, he assured Nigerians that all persons within the security agencies who participated in this travesty will be identified and subjected to appropriate disciplinary action.


Officers of the Department Of State Services (DSS), had stormed the National Assembly in the early hours of Tuesday, barricading the entrance and preventing lawmakers from entering.

Journalists were also barred from entering the complex with the DSS officials claiming that the blockage was an order “from above.”

But shortly after, the Acting President ordered the immediate sack of the Director-General of the DSS, Lawal Musa Daura.

He was then replaced by Matthew Seiyefa.
Posted by Daniel Update at 4:56 AM