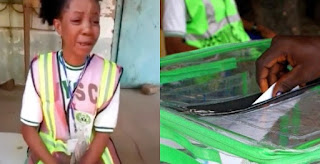 A female corps member who was deployed to the Independent National Electoral Commission(INEC), Lokoja as her place of primary assignment (PPA) and was later sent to one of the polling units as an INEC official was kidnapped by political thugs and beaten mercilessly, because she refused to take order from them to rig the election.


The lady, after she was rescued, was seen distraught and crying in a video while she was being consoled by people around her.

The bye-election to fill the vacant seat in the Lokoja-Kogi Federal Constituency which started on a peaceful note on Saturday was later marred by violence, vote buying and intimidation in Lokoja.

A News Agency of Nigeria correspondent monitoring reported that the election was marred by political thugs going from one polling unit to another to perpetrate fraud.

Although policemen and other security agents were seen at the police stations, they looked the other way, while thugs terrorised people.

At the polling unit at Paparanda Square, voting could not hold as thugs invaded the venue, snatching election materials and beating up people queuing to vote.
Posted by Daniel Update at 8:32 AM