WHY I DUMPED APC FOR PDP – SENATE PRESIDENT BUKOLA SARAKI 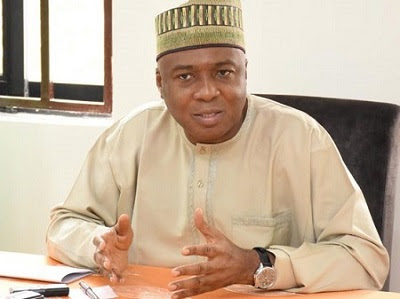 The Senate President, Abubakar Bukola Saraki has revealed why he dumped the ruling All Progressive Congress for the Peoples Democratic Party.

Saraki in a lengthy statement included his continued persecution in the hands of the ruling APC among the reasons for his defection.


Below is his full defection statement.

“I wish to inform Nigerians that, after extensive consultations, I have decided to take my leave of the All Progressives Congress (APC).

This is not a decision that I have made lightly. If anything at all, I have tarried for so long and did all that was humanly possible, even in the face of great provocation, ridicule and flagrant persecution, to give opportunity for peace, reconciliation and harmonious existence.

Perhaps, more significantly, I am mindful of the fact that I carry on my shoulder a great responsibility for thousands of my supporters, political associates and friends, who have trusted in my leadership and have attached their political fortunes to mine. However, it is after an extensive consultation with all the important stakeholders that we have come to this difficult but inevitable decision to pitch our political tent elsewhere; where we could enjoy greater sense of belonging and where the interests of the greatest number of our Nigerians would be best served.

While I take full responsibility for this decision, I will like to emphasise that it is a decision that has been inescapably imposed on me by certain elements and forces within the APC who have ensured that the minimum conditions for peace, cooperation, inclusion and a general sense of belonging did not exist.

They have done everything to ensure that the basic rules of party administration, which should promote harmonious relations among the various elements within the party were blatantly disregarded. All governance principles which were required for a healthy functioning of the party and the government were deliberately violated or undermined. And all entreaties for justice, equity and fairness as basic precondition for peace and unity, not only within the party, but also the country at large, were simply ignored, or employed as additional pretext for further exclusion.

The experience of my people and associates in the past three years is that they have suffered alienation and have been treated as outsiders in their own party. Thus, many have become disaffected and disenchanted. At the same time, opportunities to seek redress and correct these anomalies were deliberately blocked as a government-within-a-government had formed an impregnable wall and left in the cold, everyone else who was not recognized as “one of us”. This is why my people, like all self-respecting people would do, decided to seek accommodation elsewhere.

I have had the privilege to lead the Nigerian legislature in the past three years as the President of the Senate and the Chairman of the National Assembly. The framers of our constitution envisage a degree of benign tension among the three arms of government if the principle of checks and balances must continue to serve as the building block of our democracy. In my role as the head of the legislature, and a leader of the party, I have ensured that this necessary tension did not escalate at any time in such a way that it could encumber Executive function or correspondingly, undermine the independence of the legislature. Over the years, I have made great efforts in the overall interest of the country, and in spite of my personal predicament, to manage situations that would otherwise have resulted in unsavoury consequences for the government and the administration. My colleagues in the Senate will bear testimony to this.

However, what we have seen is a situation whereby every dissent from the legislature was framed as an affront on the executive or as part of an agenda to undermine the government itself. The populist notion of anti-corruption became a ready weapon for silencing any form of dissent and for framing even principled objection as “corruption fighting back”. Persistent onslaught against the legislature and open incitement of the people against their own representatives became a default argument in defence of any short-coming of the government in a manner that betrays all too easily, a certain contempt for the Constitution itself or even the democracy that it is meant to serve.

Unfortunately, the self-serving gulf that has been created between the leadership of the two critical arms of government based on distrust and mutual suspicion has made any form of constructive engagement impossible. Therefore, anything short of a slavish surrender in a way that reduces the legislature to a mere rubber stamp would not have been sufficient in procuring the kind of rapprochement that was desired in the interest of all. But I have no doubt in my mind, that to surrender this way is to be complicit in the subversion of the institution that remains the very bastion of our democracy. I am a democrat. And I believe that anyone who lays even the most basic claim to being a democrat will not accept peace on those terms; which seeks to compromise the very basis of our existence as the parliament of the people.
Posted by Daniel Update at 5:37 AM