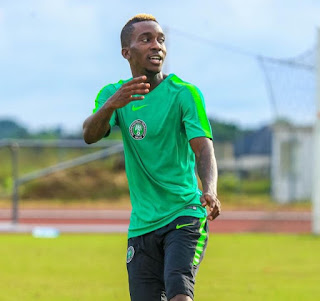 Galatasaray winger Henry Onyekuru is a major doubt for Nigeria’s 2019 Africa Cup of Nations qualifier against the Bafana Bafana of South Africa next month in Johannesburg, reports Completesportsnigeria.com.

Onyekuru has been ruled out of action for the next three weeks due to a hamstring injury.

Nigeria will face South Africa at the FNB Stadium in Johannesburg on November 17 in a Group E clash.

The 21 year old will miss Galatasaray’s home and away games against Schalke 04 in the UEFA Champions League, the derby against Fenerbahce, as well as the games against Malatyaspor and Kayseri in the Turkish Super Lig.


Onyekuru has scored two goals in 10 games this term for Galatasaray.

The Everton loanee has also made four substitute appearances for the Super Eagles since he made his first appearance against Corsica in 2017.
Posted by Daniel Update at 10:42 AM