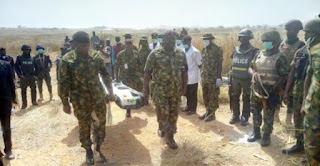 The Nigerian Army said it has found the body of a missing general, Idris Alkali.

Mr Alkali, who recently retired as a major general, was declared missing several weeks ago while travelling from Abuja to Bauchi.

His body parts were found in an abandoned well in Guchwet village of Shen district, Jos South Local Government Area of Plateau State.

Although no medical test has been done to confirm if the body parts found were actually that of Mr Alkali, the army said its investigations confirmed it so.

The body parts found were being put in a body bag as at the time of this report.

A brigadier general, Umar Ibrahim, the Garrison Commander, 3 division, spoke to journalists at the scene. He said some of the suspects who participated in the killing of the general brought the army to the well.

Last week, the army announced it located a shallow grave where the late general was initially buried before the body was exhumed and taken someplace else.

A military parade will take place at the site of the well after all the body parts have been removed, Mr Ibrahim said.
Posted by Daniel Update at 11:50 AM