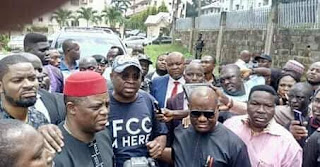 The Muslim Rights Concern (MURIC) has trained its sights on the Economic and Financial Crimes Commission (EFCC), accusing them of contributing to the popularity of former Ekiti governor, Ayodele Fayose.

The former Presidential hopeful was at the EFCC office 2 days ago and while there he fed over 150 people, including detainees and visitors who in turn allegedly sang the national anthem.

Fayose also allegedly secured lawyers for some of the detainees and promised to assist those who have challenges meeting their bail conditions.


However, the MURIC believe that this i a ploy. Their grouse was contained in an emailed press statement to HERALD.NG on Thursday, 25th October, 2018.

“It is a comedy of errors.” The statement began.

“A man accused of stealing money belonging to the people is allowed to rewind the famous Robin Hood tape under the watch of an anti-graft agency. This calls the seriousness of some EFCC operatives to question. How can they allow such a thing to happen? It is the shame of a nation. We are miffed.

“EFCC and other security agencies have no business detaining people they cannot feed adequately. It is highly immoral to arrest and detain a man knowing fully well that you do not have the capacity to cater for his basic needs, namely, food, water and shelter. Should detainees be responsible for feeding themselves? This is a national question that must be answered once and for all. Nigerians must know their rights.

“Nay, Nigerians must know their oppressors. How can we allow the same kleptomaniacs who stole our common patrimony to come and feed us with their dirty blood money in times of distress? It is mockery of the highest order and it robs us of our dignity if we welcome them with open arms. They have come to laugh at us for being foolish enough to think hardwork, honesty and patriotism alone can provide our needs. It is dehumanising. This cannot happen in saner climes. Are we serious as a people? We are nonplussed.

“Human dignity is Allah-given according to Qur’an 17:70. It says, ‘We have granted dignity to the children of Adam…’. Why should EFCC rob Nigerian citizens of their Allah-given dignity by detaining them without adequate feeding thereby exposing them to political charlatans, ideological demagogues and unrepentant con artists?

“EFCC and the Nigerian security agencies need to take note of the provisions of Section 34 (i) (a) of the 1999 Constitution of the Federal Republic of Nigeria which guarantees the dignity of every Nigerian citizen. The African Charter on Human and Peoples’ Rights, Article 4, Clause 1 & 2 also lays emphasis on the inviolability of the dignity of the human person. It says, ‘Human beings are inviolable. Every human being shall be entitled to respect for his life and the integrity of his person.’”

“Starving detainees is the same as depriving them of their dignity. It dehumanizes them by turning them into beggars. It exposes them to weakness and endangers their health. The power to detain is not tantamount to the power to starve. No policeman under the sun has the right to detain and starve a suspect at the same time.

“EFCC cannot fight corruption by promoting corruption. This is what will happen if it detains people it cannot feed. Not only that. EFCC will be encroaching on Allah-given fundamental human rights of citizens if people are detained without being fed. A moral burden hangs on the conscience of EFCC if this is what has been happening. We demand an explanation”.

MURIC also criticized Fayose, accusing him of exploiting the condition of detainees to score a cheap political point.

“Fayose is a comedian. He is exploiting the poor condition of detainees just to score a cheap political point. He is seeking cheap popularity. He is also a fake Robin Hood. This was not the way Robin Hood shared his stolen money among the poor. Robin Hood gave out every kobo stolen by him. Fayose is accused of stealing billions but he is giving out pittance. He is playing on the gullibility of Nigerians.

“How much does it cost to bail a detainee? How much does it cost to feed 150 people? He could not have spent up to N50,000. It is chicken feed compared to the humongous amount allegedy stolen by him. Fayose is like a man who stole elephants but he is deceiving the people by giving out ants. He is a pretender. We reject his Robin Hood mentality.

“As we take a break, we charge EFCC and the security agencies to spare us the horror of hunger in the cells. Detainees must be adequately fed by those keeping them out of circulation. They should not be subjected to the dehumanizing spectacle of fake Robin Hoods. We implore the Police Service Commission to review conditions of detention in police cells as it affects the feeding of detainees.”.
Posted by Daniel Update at 11:19 AM