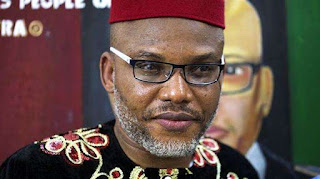 Days after the re-emergence of the leader of the Indigenous People of Biafra (IPOB), Nnamdi Kanu, the Nigerian government has finally reacted

Kanu made his first broadcast to his comrades a couple of days ago and in that broadcast, he claimed that he’d bring ‘hell with him’ when he returns to Nigeria.

Speaking to the BBC Hausa, an aide to President Buhari, Garba Shehu, said that the discovery of the IPOB leader means that the Nigerian government didn’t harm him in any way contrary to some reports.


“If it happens to be true, the video footage showing Mr Nnamdi Kanu; the truth has been revealed about his alleged assassination against Nigerian government,” Shehu said in the interview


“This fairy tale went up to United Nations General Assembly where some IPOB members staged a protest accusing Nigeria government of kidnapping and even killing of Mr. Kanu,” Shehu added.

He also stated that Kanu’s trial will resume when he returns to Nigeria, although the IPOB leader himself has said he has no intention of resuming his trial.

Meanwhile, the Department of state services has said that it isn’t working with Nnamdi Kanu in any capacity.

This is in response to allegations made by the leader of the Movement for the Actualization of the Sovereign State of Biafra (MASSOB), Ralph Uwazuruike, who in a statement said that the re-emergence of the Igbo leader was carefully orchestrated by the DSS.

“it was carefully prearranged by the Department of State Security, DSS”. said Uwazuruike in a statement on Monday regarding the re-appearance of Kanu.

“Not many of his ardent followers truly know that Kanu is not sincerely working for the Independence of Biafra. His coming to Nigeria, his arrest, detention, trial, release on bail and his alleged disappearance and resurfacing, were all prearranged by the DSS”, the statement said.