Why I advised my children against polygamy – Oga Bello 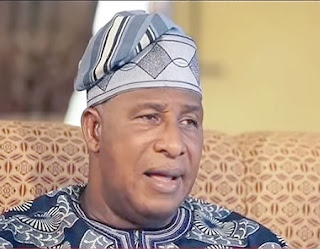 Legendary Yoruba actor, Adebayo Salami, aka Oga Bello, has revealed what he told his 18 children about polygamy.

The popular actor made the revelation in an interview with Sunday Tribune.

Oga Bello, whose children are from several women, said he advised his children to shun polygamy and not be like him.


Asked why he gave birth to so many children, the 65-year-old thespian said:


It is destiny. I did not plan for that initially, but things changed when stardom came, but I was unable to manage it. At a time, I didn’t like what I was doing, but there was nothing I could do. Then, people will always remind me of my destiny. I remember the time we used to go round, which I won’t ever do again, visiting Muslim clerics; they would ask if I was from a royal family because they could see me surrounded by many children. Now, that God has given me the children and they are all doing fine, you can see that it is destiny. I even advise my children not to dabble into polygamy; ‘you don’t need to have many children like me’. ‘You don’t know your destiny and I did not have the advantage of going about asking for your destinies.
Posted by Daniel Update at 1:41 PM