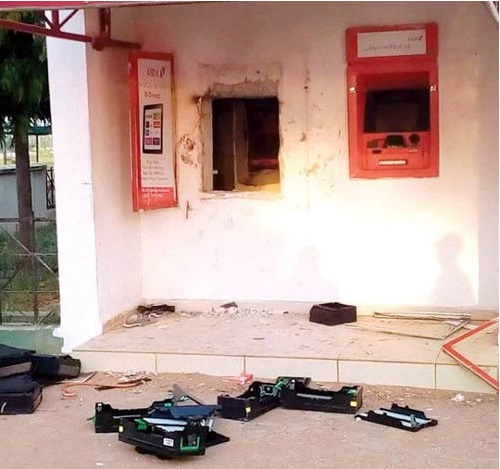 The ATM raided by robbers

A 15-man gang invaded the main campus of the Ibrahim Badamasi Babangida University (IBBU) in Lapai, Niger State and vandalised the Automated Teller Machines (ATMs) of a second-generation bank. The hoodlums carted away an undisclosed amount of cash.

According to CAMPUSLIFE, the uniformed hoodlums entered into the campus on Lapai-Paiko-Minna Road through a bush path.

A security guard, who was on duty, said that the robbers arrived on that fateful day the school premises around 3 am. He said they were armed with guns, machetes, daggers and spiked clubs.

The robbers, he said, night have been given a tipped-off by someone who knew the ATMs were loaded with cash the previous night.

The source said the robbers came in three vehicles, which were parked a few metres away from the school gate.

“They came down and gained access into the campus through a bush path,” the source said.

A cadet officer, who was assaulted by the robbers said: “I was watching over the school Administrative Building, which is not that far from the ATM gallery. It was around 3am or thereabouts when I saw three armed men dressed in uniforms, standing beside the ATM Gallery and signalling to me to move towards them.


“They told me they caught some thieves who burgled the ATMs. This made me to believe them. They asked me to follow them to see the robbers. Then, they took me to an open place where I saw my fellow security guards sitting on the ground with their hands and legs tied with ropes. Other members of the robbery gang were keeping watch on them.”

The cadet, who was injured on the leg, added: “The robbers were violent, hitting with sticks and iron. We all sustained injuries on the heads, hands, bodies and legs. They threatened to even kill anyone who wanted to be stubborn.”

One of the security men said they fell for the hoodlums’ trick because of the uniform, adding that the communication among the robbers indicated there was an informant that gave the hoodlums a tip-off. The robbery, he said, was “perfectly executed”.

He said: “None of us thought they could be robbers because of the way they were dressed. We thought they actually caught thieves, since they were in uniforms. We later knew it was false alarm used to gather all of us in one place. They vandalised and looted the ATMs without being repelled.


“We were firmly tied; we could not struggle with the robbers, because we had been overpowered. Those who watched over us had daggers and guns with them. There was no way we could challenge them. They simply had a free raid on the ATMs.”

Although the robbers overpowered the security men guarding the ATMs, CAMPUSLIFE gathered that some other security guards escaped.

One of the escapees said he ran into the bush when he saw how the robbers were beating his colleagues. He said there was no security guard that could have confronted the “dangerously armed robbers”.

He said: “The robbers were irritated by the responses of our security men who could not give them the access pin code to unlock the ATMs’ vaults. But what baffled me was how they got the uniforms they used for the operation.”

It was gathered that the robbers used a sledgehammer, axes and chisels to destroy walls of the ATMs’ gallery. They made their way into the ATMs’ cubicles and looted the cash loaded in them the previous night. The machines were completely destroyed.

The hoodlums, it was learnt, fled the campus some minutes past 5am, after operating for about two hours.

CAMPUSLIFE gathered that police arrived on the campus shortly after the robbers escaped.

The Vice-Chancellor (VC), Prof Muhammad Nasir Maiturare, led top members of the management to the scene on assessment. He said the incident would investigated to prevent a recurrence.
Posted by Daniel Update at 11:30 AM