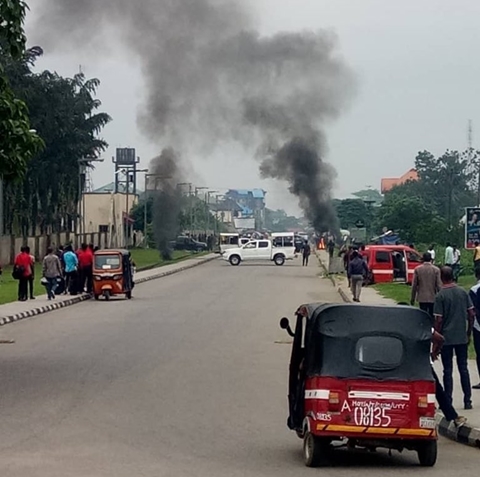 Scene of the incident
According to a post made on Twitter by the opposition Peoples Democratic Party (PDP), the Akwa Ibom state house of assembly was on Monday, invaded by suspected thugs, who prevented the lawmakers from gaining access into the assembly premises.
Reports revealed that the development was connected with a court order declaring vacant the seat of Idongesit Ituen, member representing Itu constituency.
Ituen was recently sacked as a member of the state assembly by the federal high court. The court judgement followed his defection from the Peoples Democratic Party (PDP) to the All Progressives Congress (APC).
Luke Onofiok, speaker of the Akwa Ibom house of assembly, had a few days ago, barred Ituen from attending plenary. 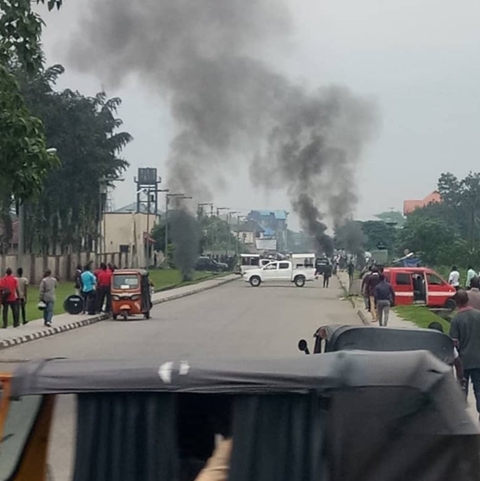 Meanwhile, the PDP has alleged that the APC is behind the barricade.
A tweet by the opposition party read: “The Akwa Ibom State House of Assembly (AKHA), premises is under heavy attack by members of @OfficialAPCNg thugs.

“The thugs invaded the complex, chanting the slogan “APC! Change” as they set fire and blocked the entrance to the assembly complex.
Recall that the @OfficialPDPNig State Publicity Secretary, Comrade Ini Ememobong had earlier this morning alerted the public via a press release of the impending attack planned by the @OfficialAPCNg to forestall seating by the members of the AKHA today.
We therefore call on the @PoliceNG and other security agencies to move in quickly to restore peace and order in the State. We believe the Police will bring the perpetrators to book as we advise members of the public to stay away from the AKHA and its environment."
Posted by Daniel Update at 9:56 AM