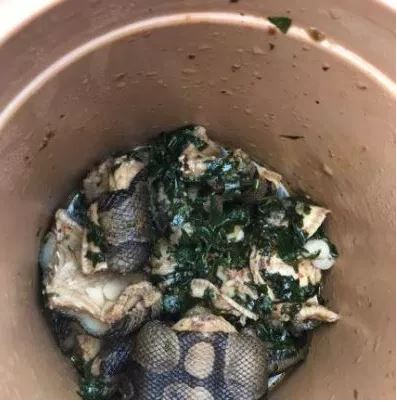 The snake delicacy prepared by Mummy Yo
A Nigerian lady simply identified as Mummy Yo, has shared a snake delicacy and thrown out an open invitation to whoever cares to join her.
The Owerri based lady claims the dish is very tasty, saying that it is sweeter than chicken meat, but one would have to be mindful of the bones.
When trolled by a follower of using the same mouth to kiss an unsuspecting man, she said; “what am I doing with a man that can’t eat and enjoy snake meat? In fact, he should be able to hunt for it in the bush when I’m craving.”
In some eastern states and some other parts of Nigeria, snake meat is a delicacy enjoyed by the old and young while in some parts like Okija in Anambra, particular species such as the python are reportedly revered deities, and killing them is an abomination which could sometimes lead to heavy financial fines and in extreme cases,  banishment.
Posted by Daniel Update at 1:14 PM