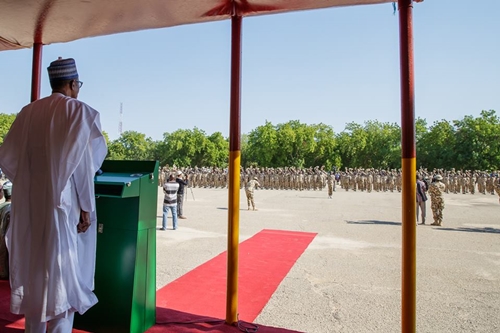 Buhari addressing the troops in Borno
Speaking while addressing military troops at Maimalari Cantonment in Maiduguri, the Borno state capital on Wednesday, President Muhammadu Buhari, reiterated his commitment to improving the welfare of the Nigerian Army.
According to PREMIUM TIMES, the president who made the disclosure about 10 days after scores of Nigerian soldiers were massacred by boko haram terrorists, said the troops were always on his mind, adding that ”he had always woken up thinking about them and the conditions they operated”. 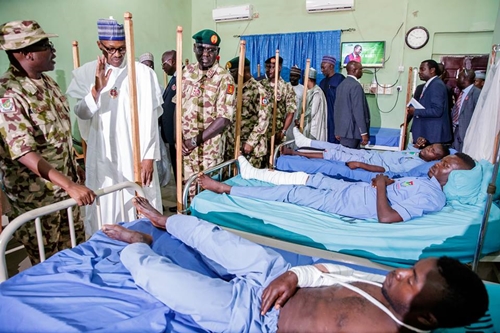 Buhari visited wounded troops at the hospital
The president who also visited injured troops on admission at the Military Medical Centre. Maimalari Barracks, Maiduguri, said; “I will support you to play your constitutional role of defending the integrity of the country from both internal and external forces. This is the oath you have taken just as I took an oath as the President and Commander-In-Chief.

“I assure you that I go to bed and always wake up thinking about you and the conditions under which you operate.” 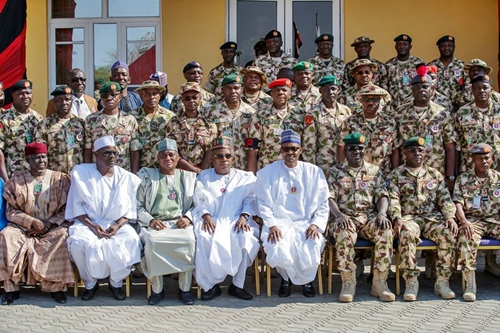 President Buhari who has been flayed by critics over the carnage asked the troops to maintain their loyalty and defend the country.
”Whatever happens, a military no matter how equipped or how well led, without discipline is no use to the country," he said.
While commending the troops over their gallantry and sacrifices, Buhari urged them to increase their commitment in engaging Boko Haram insurgents, adding that plans were on to adopt a new enhanced salary structure for the military in recognition of their contributions to security, social and economic development of the country.
Posted by Daniel Update at 1:07 PM