Controversial Nigerian journalist, Kemi Olunloyo has accused celebrity blogger, Linda Ikeji of stealing her baby daddy, Sholaye Jeremi’s sperm after a bout of sex at a hotel. Though lots of social media users believe Kemi might be quite hyperbolic in her claims sometimes, but this particular allegation seems to be corroborating Stella Dimokokorkus’s claims when she had a clash with Linda recently.
She wrote:
Sholaye Jeremi is planning to splash some cash on his favorite past time this Christmas and it ain’t women. It’s more exotic cars.
Jeremi is already the owner of one of the top notch Rolls Royce’s. The Delta big boy has distanced himself from Linda Ikeji’s baby Jayce after allegations that she took his used condom from a hotel encounter to an IVF clinic to impregnate her eggs and have a surrogate carry it.
Journalist and Professional Blogger Stella Dimoko Korkus recently called Linda a “sperm thief”. I reported a bulk of the surrogacy story. Linda ruined my brand and I forgave her for that part. 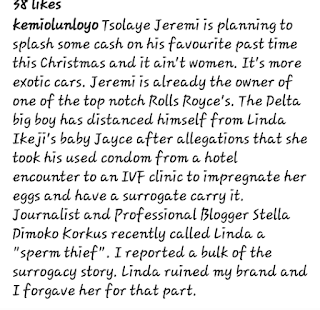 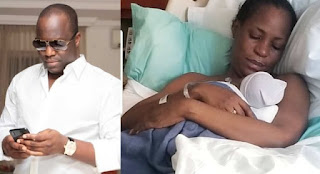 Posted by Daniel Update at 7:32 AM