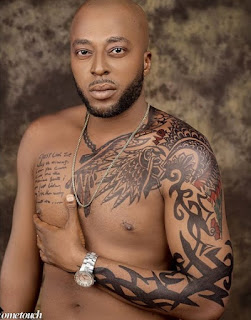 While speaking in an interview with PUNCH's Saturday Beats, controversial Nollywood actor, Benson Okonkwo, spoke on how he is already getting used to people accusing him of being gay, adding that he is tired of talking about it.

The actor who noted that playing gay roles in three movies in the past, was probably the reason why he was being accused of being gay, was trailed with a public backlash few days ago online, after he released some nude photos of himself, in which he used a curtain to cover his manhood.

The actor who immediately reacted to the insults he got from people by releasing a statement on his Instagram page, blamed the situation on his being “handsome”.


“There is nothing wrong with that picture; I have talked about this gay issue endlessly and I am tired. People always accuse handsome men of being gay," he told PUNCH.


“I have played the role of being gay in three movies so maybe they are accusing me because I did justice to the roles. I am a versatile actor, so I was just being professional.


“I took the picture for a movie. I have been living with this allegation and it is not fair; God will judge the people judging me. Whoever thinks he has clean hands should cast the first stone.


“Let them keep talking, talk is cheap and free; rumours even make me more popular. I have my fans, people still love me regardless of what some others say.”

He further referred a correspondent to the message he released on his Instagram page earlier in the week where he stated that Nigerians should focus more on making their lives better rather than giving more attention to how other people live their lives.


“I feel people should dedicate more time and attention towards bettering their lives before trying to fix others’. The sky is wide enough for everyone to spread their wings and fly to whatsoever destination they choose to.


“Everyone with their cross to carry, so people need learn to mind their business and if they mean well for other people they care about, then there is a proper/ constructive way of doing such, not the bitterness and hypocrisies we find around today,” he had written.
Posted by Daniel Update at 12:25 PM