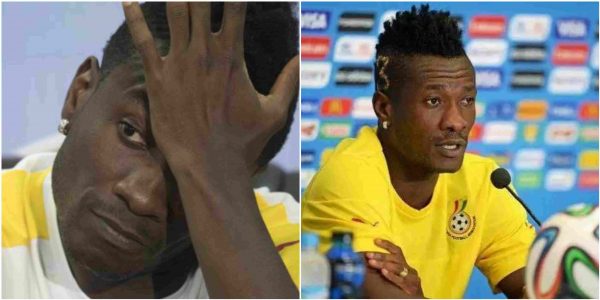 Black Stars captain Asamoah Gyan is broke as he has reportedly filed a bank statement in court to prove that. According to reporters, the account details submitted by Gyan indicate that he only has four thousand cedis (GHC 4000) with the National Investment Bank (NIB).

“My front and back, up and down is that money (GH¢4000) you see there,” the Black Stars captain is reported to have said.

When asked if he did not have an account abroad, Gyan reportedly submitted a Bank account from Turkey, where he currently plays, with zero balance as proof he has truly not been paid for several months.

The filing of Gyan’s financial situation became necessary when the Accra High Court ordered the footballer to ensure that he paid for the air ticket of his wife and all their three children traveling from the UK to Ghana for a DNA test to be conducted.

According to the court, the children needed to be protected from the stigma of the ongoing court process for which reason it suggested Gyan booked a business or first class ticket for them and their mother as well as prepare accommodation for them in Accra.

The court which thought Gyan was using ‘delay tactics’ after he initially declared himself broke thus ordered the Black Star skipper to file his full bank account details with the court in two weeks.
The DNA test has been scheduled to take place in January next year.

Earlier, Gyan had told the court in August that he could only afford GHC 3000 a month for the upkeep of the three children and the wife who are based in the UK

Posted by Daniel Update at 7:25 AM