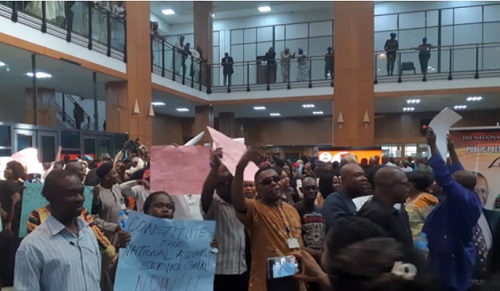 Protesting workers shut National Assembly, demand salaries
Some workers under the umbrella of Parliamentary Staff Association of Nigeria (PASAN), were captured on camera chanting songs as they blocked the entrance of both chambers of the National Assembly, and vowed not to back down until they received notification of payment.
The workers held placards bearing inscriptions such as ‘Omolori is a contractor’ ‘killing staff with poor condition of service’ and ‘constitute the National Assembly commission now.’
Sani Omolori is the clerk of the assembly.
The Chairman of PASAN, Bature Musa, who spoke on the scheduled two-day protest against non-implementation of a new salary structure and a backlog of arrears, said that today's protests and picketing of National Assembly by members, would end at 2pm.
He said; “National Assembly is a custodian of the law and we are not in this parliament to kick against the law. We are law-abiding citizens. Once it is 2 O’clock, we will return to our respective offices.” 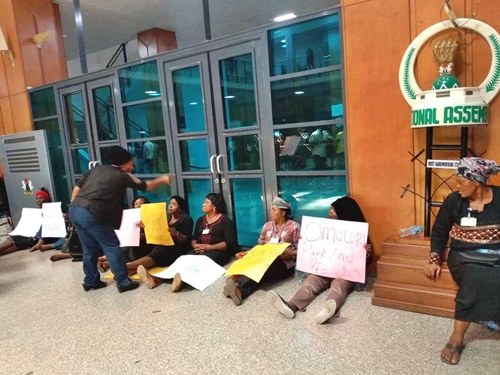 Musa, who addressed journalists saying that lawmakers would not be prevented from accessing the Red and the Green chambers when they arrive, stated that the workers were not in a faceoff with lawmakers.
He said, “The word ‘picketing’ does not prevent anybody from working, it is a message passed to the leadership of the National Assembly. And don’t forget, it is for a duration of between 9am and 2pm. Then, after that, everyone will return to work.

“We have not asked anybody not to go to their offices. What we had at the back of our minds when we set out was that when they come around, they will definitely find out what is happening, because we have written to them almost eight months ago and nothing seems to be happening.

"You will agree with me that they are almost on their way out and this is the best time for us to cry out loud because the whole world will know why we are embarking on this peaceful demonstration."
The PASAN leader said the workers were ready for negotiations with the National Assembly management.
Posted by Daniel Update at 1:48 PM